A train of the AMT Genova-Casella railway line in Italy was stopped only a few seconds before crashing into a yellow fleet vehicle following an alarm of the train’s safety system. The digger was left over from previous track maintenance after an earthquake in the area last week. 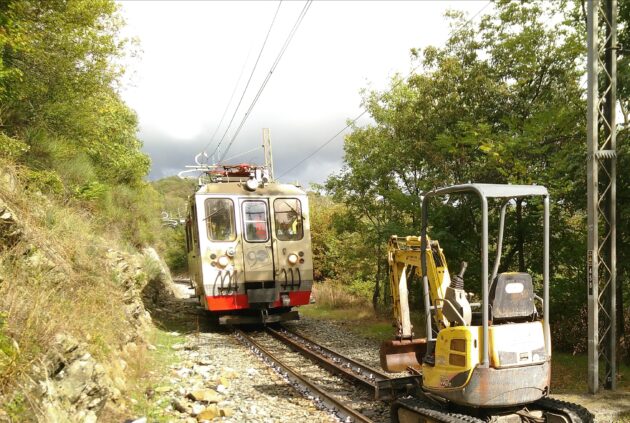 Luckily, this was only a simulation well prepared by AMT of a similar real world accident that happened exactly three months ago. It was one of the use cases demonstrated by the CertiPro project co-funded by the European Space Agency (ESA) to an international audience of operation and safety experts from the railway domain, highlighting the potential of a decentralized approach for train and track worker protection. The project paved the grounds for successful certification to relevant railway safety standards with the target Safety Integrity Level (SIL) guided by the certification experts of BERNS Engineers and Swiss-based CertX.

The safety system demonstrated was a virtual infrastructure by Intelligence on Wheels (IoW) – virtual, as it relies only on the TrainCAS onboard equipment that can be retrofit to rail vehicles of any type or age. Track workers were provided with special hybrid smartphones from Airbus SLC running the Positive Track Worker Protection (TWP) System, directly interacting with the trains without using any cellular network infrastructure along the track.

After an introduction to the technology, participants of the event were invited and enabled to see the new approach from the train driver’s, the track worker’s as well as the centralized controller’s perspective. “The guests gave applause when the train driver got an alert about the digger on the track which he could only see seconds later” said Dr. Andreas Lehner, the CTO of Intelligence on Wheels. “People responsible for the safety of their staff were delighted to learn that actually the train takes care of the track workers – a safety support technology seemingly integrating with the railway system in addition to humans acting as train control or drivers”.

Further, the demonstrations nicely illustrated how any kind of railway operation center integrates to the approach through a data platform from ETC establishing in particular a migration path for an economic and fast rollout.