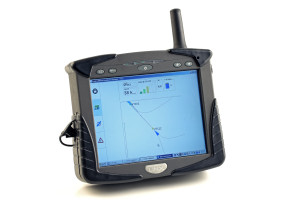 A portable version of our on-board collision avoidance system is available which can be used to temporarily equip vehicles such as locomotives or even single wagons. A typical use case for the portable version is to equip any rolling stock which is about to enter a certain area (e.g. maintenance area) where the existing signaling and control system has to be switched off during the work in progress. For example, a set of portable units can be pooled by an infrastructure operator to temporarily equip trains which would be otherwise not allowed to drive into specific areas. As the portable version runs on battery power for several hours, it might even be temporarily attached to stabled load to make these wagons “visible” to other trains even if there is no locomotive attached to the stabled load.